Upgrade proves that you don’t have to be dumb to be fun.

This was originally published at Flickering Myth on 4 September 2018.

As the mastermind behind several modestly-funded hits, like Insidious and the early Saw movies, Leigh Whannel has repeatedly proven that you don’t need the resources of a Hollywood Blockbuster in order to thrill audiences.

Instead, all you need is a strong idea, a little ingenuity and some talented colleagues to help bring your vision to the screen. If all these elements converge, then you should have no trouble competing with high-profile franchises and comic-book adaptations.

Whannel clearly appreciates this, as each of his projects has been made on a shoestring budget. Moreover, whilst his output hasn’t been universally great, he has consistently shown that he is a competent pair of hands and a dependable money-maker to boot. Because of this aptitude for working cheap, he has now garnered enough industry cred to pursue whatever zany passion project takes his fancy.

Which brings us to the writer-turned-director’s latest offering, Upgrade. A genre blending, cyberpunk, revenge flick, this is something that Whannel has been developing for years and like all of his previous work it has generated a lot of buzz despite its relatively humble origins (the estimated budget is somewhere around the $5 million mark, which probably wouldn’t cover the catering for most blockbusters). Praised for its intriguing premise and stylised hyper-violence, the film has already established a cult following, with many pundits suggesting that it puts its more expensive peers to shame.

Now- two months after its US release- Upgrade is debuting overseas, which means that the rest of the world can finally jump aboard the hype train. But is the unassuming thriller really worth all the pomp and circumstance? 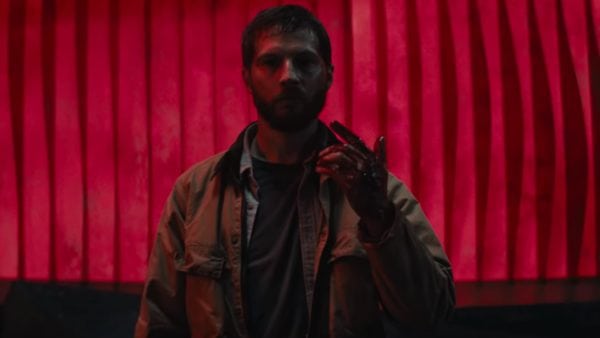 Set in a future that is just around the corner, the film focuses on Grey (Logan Marshall-Green), a technophobe who has the misfortune of living in a society completely dominated by computers. Law enforcement is reliant upon drone surveillance, smart houses take care of their own upkeep and even recreational drug use has been supplanted by an addiction to VR. Everything is ostensibly smoother and more convenient, yet Grey remains ever-sceptical and yearns for the golden age of vinyl records, analogue devices and vehicles that require actual human drivers.

One day, after refurbishing an old car for a famous tech guru, Grey is treated to a showcase of the inventor’s latest creation; an AI chip named STEM. The scientist excitedly explains that the revolutionary implant can be inserted into a person’s body to serve as a kind of secondary brain, giving the recipient enhanced motor skills, heightened agility and even increased intelligence. Of course, Grey is characteristically cynical about this and suggests that mankind doesn’t really need such an upgrade.

This attitude changes however, when a fateful car accident leaves both Grey and his wife susceptible to violent criminals. In an ensuing attack, the former is left paralysed from the waist down and the latter is tragically killed.

Determined to track down his mysterious assailants, the bereaved husband abandons his old-fashioned ideals and volunteers as a Guinea pig for STEM, in the hope that he can regain his ability to walk and get revenge. In the process, he finds that he is not only restored to his original condition, but that he has even been augmented with incredible new skills. Now armed with superhuman senses, a proficiency in martial arts and the capacity to switch off his pain receptors, Grey decides to find his wife’s killers and assassinate them in increasingly gory ways. 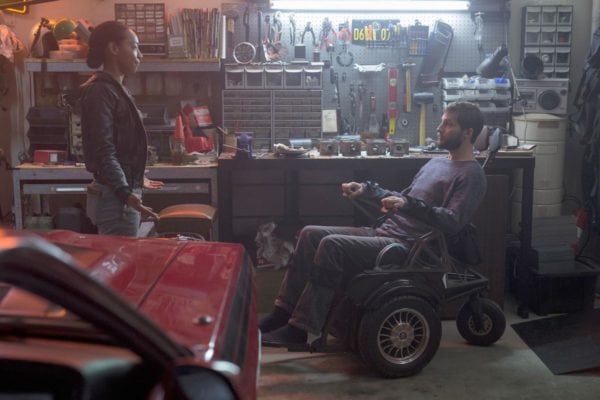 Right off the bat, it’s fair to say that the premise is absolutely terrific, like Death Wish crossed with a particularly good episode of Black Mirror. Yet that only gives you a rough idea of what’s in store and to spoil the interesting twists would be a disservice to Whannel’s sharp writing and inventive storytelling.

Sure the surface-level gist of ‘’spouse-on-a quest-for-revenge’’ has been trotted out a thousand times before in cinema, but here it’s all being presented with a fresh coat of cybernetic-enhanced paint. After all, the movie’s core gimmick changes everything from how the investigation scenes play out, to how the protagonist conceals his vigilantism from the police.

Best of all though is how the idea affects the action sequences, which are all expertly shot, masterfully choreographed and dizzyingly energetic. To give you a flavour of what makes these moments so special, Grey can hand over total control to STEM whenever he is faced with confrontation. Once the AI takes the wheel in these scenarios, then our hero is transformed into a perfect killing machine, capable of mesmerising acrobatics, astonishing brutality and predicting his opponent’s next move with the utmost accuracy.

As is to be expected, the resultant fights are pleasingly ferocious, if a little infrequent and too short (the slow pacing is a bit of an issue). They are also strangely funny as well, because STEM is unable to influence anything above Grey’s neck, and so the system has to manually move his head out of the way to dodge incoming blows. This makes for a unique visual, reminiscent of something from a slapstick cartoon. It’s also amusing to see the squeamish hero forced into the role of a bemused observer, powerless as his own independently limbs flail around and cause all kinds of mayhem.

With these enjoyably kinetic scenes, Whannel demonstrates that a low-budget needn’t be an obstacle to creativity and he also gives Marshall-Green a proper opportunity to show off his surprising comedic muscles. On that note, the actor’s animated depiction of a man constantly amazed by his own actions injects welcome levity into a character that could otherwise be quite dour and unlikeable. That being said, he’s still very good at carrying the film through its more emotional beats when the need arises.

Elsewhere, every of other aspect of Upgrade is spot on. The believable sci-fi setting is remarkably well-thought out and realistic. There are no jetpacks, no flying cars, or spaceships, just tiny little details like surgeons who use X-ray contact lenses to perform operations.

This is a smart decision on the part of the screenwriter, as the refreshingly grounded approach allows the film to tackle some fairly ambitious themes in its second half, examining humanity’s dependence on technology and whether or not we are making ourselves obsolete. In fact, as the film moves towards its climax, it becomes less concerned with set-pieces and instead dedicates itself to a more cerebral breed of science-fiction.

It then all culminates in a darkly shocking ending that will stay with you for days. In this sense, it’s a rare film that actually disguises its intelligence and demonstrates that being clever and being fun don’t have to be mutually exclusive concepts.