Next7. At the Mountains of Madness
DLCReviewsVideo Games

Harrison takes a look at Friday the 13th and considers how it is holding up one year on from its original release.

It’s only been a few months since the last update to Friday the 13th: The Game, but in that short space of time, the combined teams over at Gun Media and IIIFonic have been furiously making announcements, pledging new features at an absolutely manic rate.

They arguably got a little over-eager in this regard, with a level of promise-making seldom observed outside of national politics. It was as if the developers had a pathological compulsion to please and were therefore willing to say anything in order to keep their fanbase happy. 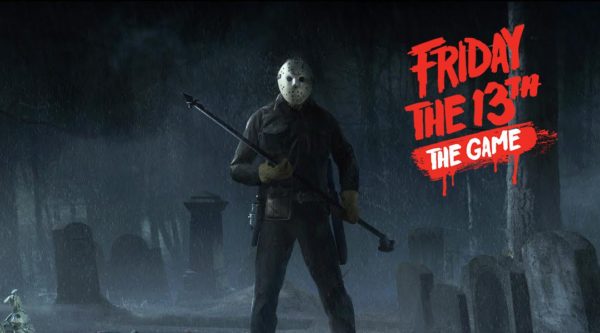 Indeed, IIIFonic forecast- amongst other things- new playable characters, the ability to weapon swap, various balancing tweaks, Jason X content, and a revised punishment for rage quitters (more on that later). Oh, and they also vowed to finally introduce dedicated servers, along with a proper single-player mode as well.

This ambition cannot be faulted and it’s abundantly clear that the developers really do care about their product. In fact, their tendency to over-hype things is of the more affable, Peter Molyneux variety, in the sense that it stems from misguided passion and blind optimism, rather than conscious deception. Having said that, they have still dug themselves into a bit of hole. Earnest intent aside, they are selling a product, which means that they should appropriately manage expectations, instead of stoke them up to 11.

After all, because of the team’s inability to simply stop announcing things, there is now a massive anticipation associated with the new patch. It certainty has an an awful lot to deliver on, perhaps too much, because as it stands, there are certain things conspicuously missing here (most notably: those dedicated servers!). Moreover, the content that has been included is far from refined.

Whilst the minor improvements- i.e.balancing adjustments; revamped animations and cosmetic upgrades- are all fine, the meatier additions leave something to be desired. 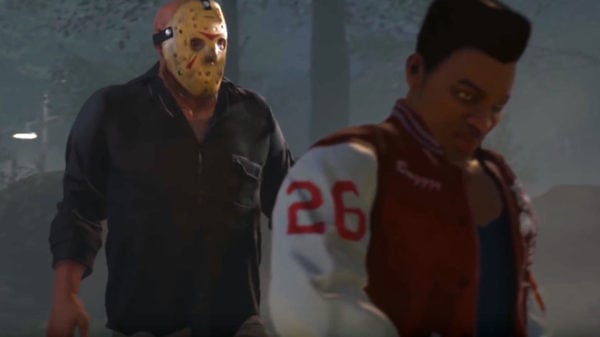 In particular, the new single-player mode is a complete mess. Which is a shame, given that A) its absence has long been a sticking point for many critics and B) the gameplay foundations are perfectly solid. Alas, as is becoming a recurring theme with Friday the 13th, whilst everything is fantastic on paper, the technical execution is disappointingly lacking.

The new mode is kind of reminiscent of a bargain-basement Hitman, in which you take control of Jason and are tasked with picking off a group of typically amorous teens in either stealthy or creative ways. In total, there’s only 10 missions to sink your teeth into, but to incentivise further replay the developers have included a litany of extra trials, some of which are mutually exclusive. This means that completionists will have to do the whole thing multiple times if they want to 100% it.

Each map has 3 standard ”skulls”: one for ensuring that there are no survivors; one for doing so whilst remaining undetected, and one for meeting an arbitrary score target. Meanwhile, there are also bespoke objectives tailored to each level, ranging from ”murder the designated teen in a specific way”, to ”ensure that no one reaches an allocated landmark”. As aforementioned, you can’t always do these things simultaneously, or even in a clean attempt. Therefore if you want to meet all of the requirements in a given scenario, you’ll need to re-experience it several times. 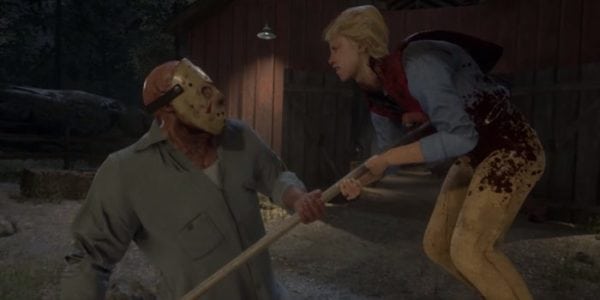 On the surface, these missions could be fun, given that they are building upon tried-and-tested mechanics for an entirely new experience. This should make for a nice change of pace from the multiplayer, as you get far more opportunity to be tactical with your approach.  You’re not working against the clock to hunt down knowing victims anymore, instead you’re dealing with unsuspecting cattle in much more contained venues. This means that you’re no longer playing an expansive game of hide-and-seek and thus have greater scope to experiment and play around.

There’s plenty of fan-service thrown into the mix as well, with scenes fastidiously recreated from the films. There’s a meticulous attention to detail in the environments, dialogue is lifted directly from the source material and classic kills are replicated in all their outlandish glory. Being able to homage the entire climax of The Final Chapter, or pull off the famous speargun kill from Friday the 13th: Part 3, is doubtlessly going to thrill any devotee of the franchise.

Speaking of which, the plethora of new fatalities is easily the highlight of this particular offering. Figuring out where they are and how to execute them is a real treat, and you can tell that the devious think tank over at IIIFonic had a blast devising them.

At its best, the new campaign successfully taps into the sinister, power fantasy appeal of Friday the 13th. Role-playing as an unstoppable killing machine, stalking your would-be victims from the shadows and then perfectly executing your fiendish plan is an exhilarating process.

Or at least that’s true at the beginning, but the fun rapidly dissipates. 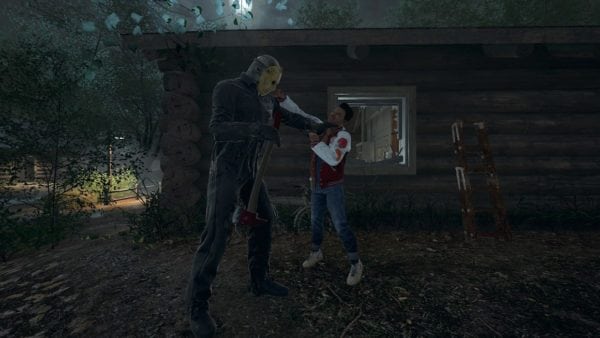 As with the earlier iterations of Friday’s multiplayer, the novelty of this solo experience is quickly undermined by just how frustrating, janky and fundamentally broken it is. The performance is wildly unstable, the AI behaviour is erratic and difficult-to-gauge and glitches are ludicrously rampant, along with persistent frame-rate drops and recurring crashes. Even the controls have somehow been botched, despite the fact that they’re identical to the existing ones. In particular, the interact button proves to be a fickle mistress, often neglecting to carry out its duties, presumably out of sheer contempt for the player.

When all of these problems converge – and they regularly do – then you’re effectively presented with a Kobayashi Maru situation, i.e: a true no-win scenario. The game insists that you are at fault, either because someone got away or because you were spotted. But make no mistake, you didn’t fail it. It failed you.

You’re not to blame if the command prompts aren’t responding, or if a door refuses to open. Nor can you help it if a counsellor never arrives because they got stuck on a rock. Likewise, if divine Providence has intervened to save Chad by teleporting him halfway across the fucking map, then that shouldn’t reflect badly on you. The game did not uphold its end of the bargain. It ceased to function and it will do so many, many times.

This wouldn’t be so grating, were it not for the fact that every single time you restart a level, you are forced to endure the exact same, unskippable cut scene. As a result, if you are having a notably tough time with a challenge (or if the game unaccountably freezes on you) then you’ll have to endure the opening cut-scene on an endless loop and it wont be long before you’re capable of reciting the dialogue in its entirety.

For instance, take this little exchange from Chapter 10:

Tiffany: Mind if I dance with him?

To clarify, I didn’t have to look that up. This scene has been committed to memory, etched onto the very matter of my brain, after only a single play session. That would be excruciating enough if it was my fault, but more-often-than-not the restart happened when the game just shit itself and decided to punish me for it!

What’s even worse is that sometimes these openings (which I have to stress are unskippable) don’t even play properly. On both the PS4 and Xbox One versions, there is a specific intro that has a good chance of crashing the game and it was not uncommon for me to see clones of NPCs materialise in the middle of a cut-scene.

And as for the defective AI, that’s possibly the biggest ball-ache of all. They can’t seem to decide if they’re working to a preordained path, or if they’re instead improvising their behaviour. I think it’s supposed to be the former, but it doesn’t always work like that, as if we’re in Westworld or something and the characters are rebelling against their narrative. 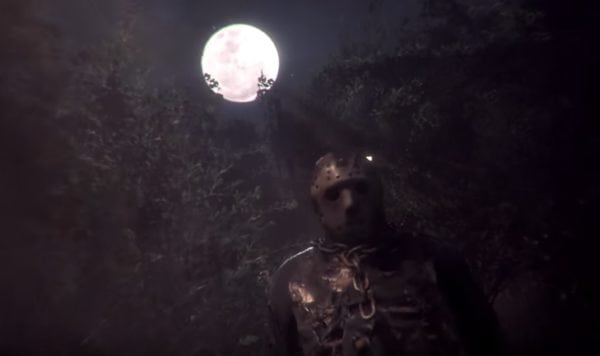 This is highly disruptive to the gameplay, because achieving the perfect stealth-run requires you to know exactly where the NPCs go to isolate themselves and exactly when they do it. Everything needs to be in precise synchronicity for this, otherwise all your planning goes down the drain. Even a split second going amiss can make the difference between a kill and a missed opportunity, or between a character facing one direction and them facing another, so they need to be regimented!

Admittedly, there are many stealth games out there that use unscripted AI and don’t have things like designated patrol routes (Metal Gear Solid V, Alien Isolation). In those games, you obviously can’t rely on set patterns and have to adapt to situations as they unfold. However if that’s the case, then the level design should properly account for this off-the-cuff dynamic.

Yet that’s not how it works in Friday the 13th, and so you can never be certain how to proceed.  You can’t predict if the AI will suddenly verge from the path that it has invariably taken in every other instance. Sure, Eric is programmed to go outside after he’s been rejected by Tiffany, but the one time that you prepare for him doing this will be the one time that he inexplicably remains inside.

Hell, the NPC behaviour is so volatile that on one occasion a wheelchair-bound character miraculously recovered and went for a fucking moonlight stroll!

And the bloody Salt Mines 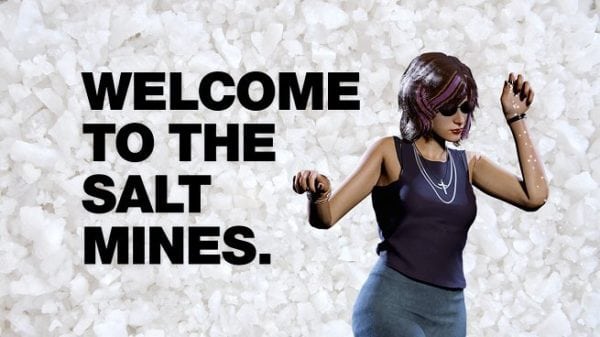 Those single-player challenges might be blatantly unfinished, but at least you can ignore them and it wont have much of an impact on the rest of the game. The ”Salt Mines” on the other hand, are a much more dangerous proposition. Conceived as a deterrent to rage-quitters, this new system threatens to segregate any players who are deemed to be ”salty” by IIIFonic. In other words, it’s a method of shaming those who ostensibly have a history of poor sportsmanship.

Again, this is theoretically viable and anywhere else it would be a welcome solution to the problem of sore losers. But in a game as notoriously unreliable as Friday the 13th, it’s rather galling that they have the nerve to introduce this. Yes, people are guilty of quitting matches early and I have no shame in admitting to it myself. Why? Because the game practically dares me to.

When the lag becomes unbearable, when cheaters are exploiting glaringly unaddressed bugs and when my character freezes in the middle of an animation (and thus become useless), then of course I’m going to quit. As a working adult with real-life commitments, I don’t have the time to simply power through these badly performing matches. I’m only going to stick around for the ones that work.

For the game to brand me as a ”salty”, simply because I refuse to put up with its shit, is just a step too far in my book. If a car habitually stalled every time you tried to change gear, you wouldn’t grin and bear it. You’d get a new car. And you wouldn’t expect the manufacturer to come out publicaly and criticise your driving ability like a bunch of knobheads.

So, before you start condescending me about how’ ‘losing is a part of playing’, why don’t you get your product into an acceptable state first? Because until it’s fixed, I am going to continue leaving broken matches. And the day that I am sent to the salt mines for that crime, will be the day that I stop giving this mess a chance and put it away for good.