Gehenna: Where Death Lives doesn’t have much going for it, but it does boast one of the most fitting taglines in cinema history: ‘’Some fates are much worse than death’… Indeed. 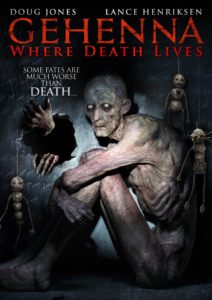 A scouting party are exploring the picturesque island of Saipan, with the intention of tracking down the ideal place for a new resort. These efforts are exacerbated somewhat by the incensed locals, who take objection to how the group are disrespectfully traipsing all over the island’s cultural heritage. In spite of this resistance, the team eventually discovers the perfect spot: remote; tranquil and situated right next to a gorgeous beach.

They are about to sign-off on the idyllic location, when they inadvertently stumble across a derelict WW2 Bunker. Theorising that this underground complex (a remnant of the former Japanese occupation) might cause some structural problems for the coming resort, the gang foolishly opt to investigate further. As you would expect, paranormal shenanigans ensue. 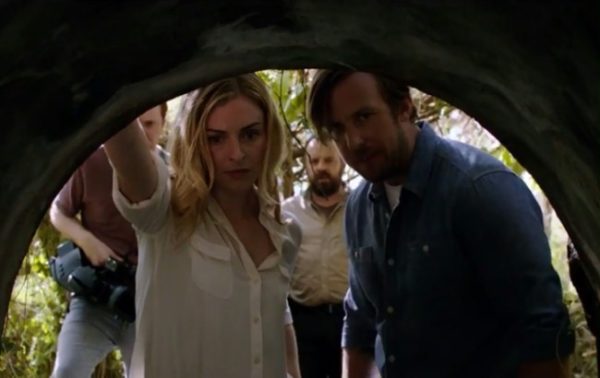 Gehenna: Where Death Lives doesn’t have much going for it, but it does boast one of the most fitting taglines in cinema history: ‘’Some fates are much worse than death’… Indeed.

For instance you could:

2) Contract a debilitating wasting disease and slowly wither away as your loved ones watch-on in bewildered horror.

3) Be condemned to a lifetime of gruelling labour, at the mercy of an illegitimate dictator who threatens to punish your family for any perceived slack. Every day you come home weary, beaten and afraid. Afraid that, no matter what you do, no matter how hard you try to save them, your children will inevitably succumb to the same miserable destiny.

4)  Suffer from the infamous ‘’locked in syndrome’’, with a looping series of infomercials playing on the TV in front of you.

5) Work as a Sonderkommando in a Nazi Death camp, an occupation so harrowing that you sometimes envy the very bodies that you cart off to the furnace.

Should you find yourself in the latter scenario, then there are very few people in this world who will be able to understand your pain. So please, exercise some viewerly discretion and heed my warning: stay well away from Gehenna: Where Death Lives.

If you still insist on watching it, then I implore you to keep reading.  At least that way you will be fully prepared for the galling tedium that’s to come…

Before going any further, I want to stress that this movie is not funny bad, or even fascinatingly inept. It’s just hard work. So if you decide to give it a shot, then don’t blame me if you have a thoroughly miserable time. Because this is nothing but turgid, uneventful claptrap; completely devoid of scares and entirely lacking in narrative coherence or basic entertainment value.

Like me, you may have been lured in by the film’s promise of recognisable character actors, like Doug Jones or Lance Henriksen. If that’s the case, then you will be pissed to discover that their combined screen time is approximately 180 seconds, with one them- quite literally – phoning in their performance from behind a desk. To be crystal clear, this film is not the Doug Jones vehicle that the poster is selling you. It doesn’t remotely hinge on one of his signature creepy characters, he just happens to be in it for a solitary scene and then a couple of insert shots thereafter. Still, apparently that’s enough to hang an entire marketing campaign on. Hmmm…

Your justified sense of rage will doubtlessly swell further, when it turns out that the actual leads of this rotting garbage pile are a bunch of clueless amateurs, who deliver their lines so awkwardly that you’ll swear they’ve never had to use vowels before. 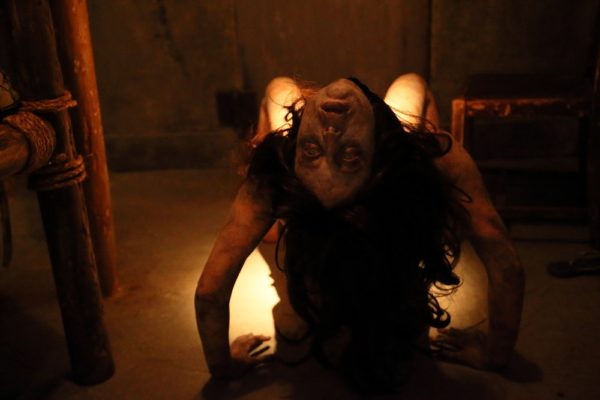 To make matters worse, the filmmakers presumably thought that lights were only for high-falutin Oscar movies, and so elected to abandon them altogether. It certainly feels that way, with some sequences being so needlessly dark that they might as well be in a radio play for all the difference it would make. As a result, the majority of your viewing experience will be spent hopelessly squinting, trying to discern what the hell is happening on screen. Rest assured, it’s a waste of effort. Just save your eyesight for something that actually deserves it.

Oh, and you will also be subjected to relentless attempts at ‘’psychological horror’’, courtesy of a supernatural curse that only makes sense because every character in the film has unaccountably suffered a recent bereavement. It’s thoroughly unclear what would actually happen them otherwise. I suppose the curse would just skip them out?

It’s around this point that you will start to notice  that the movie is not only intolerably generic and dreadfully acted, but also oppressively stupid. This notion will be later substantiated when a character wanders into a dimly lit room and posits that it looks too similar to all of the others. Upon making this observation, he inexplicably reasons that he must be stuck in some kind of temporal loop.

He says this, despite the fact that bunkers aren’t exactly known for having varied interior designs. In fact, it never once occurs to him that maybe the reason the rooms all look the same, is because they’re all dark, grey and empty. Instead of thinking in this way (you know, like a rational human being) he just infers that the very fabric of reality is deteriorating around him! Granted, he is later proven right, but it still doesn’t change the fact that this was his first fucking assumption! 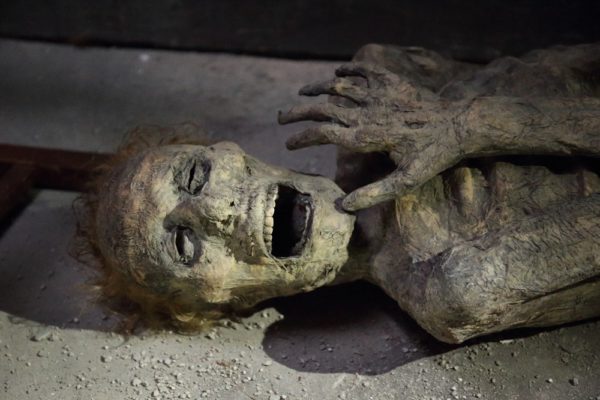 To be fair, characters will come to similarly groundless conclusions throughout the movie, but after a while you’ll stop caring. You’re already long past trying to make sense of this nonsense. You just want it over with. So whenever someone makes an out-of-nowhere remark, or formulates some kind of bizarre and unmotivated plan, you’ll just roll your eyes and mutter ‘’Fine. Whatever it takes to get to the goddamn ending!’’

Speaking of which, as we approach that long-overdue climax (which involves a twist so heavily telegraphed, that Mr. Magoo could see it coming), you’ll begin to feel a deep-seated anger. A hateful sensation. One that is festering somewhere deep within your very being. If you’re wondering why you’re feeling this way, it won’t be thanks to an opportune organ failure (which would be a sweet mercy), but because you’ve just realized that nothing in this movie is of any consequence whatsoever.

Indeed, until the last couple of scenes, it’s all just people aimlessly wandering around in the dark. Evidently, this is all part of a calculated effort to stretch the runtime out to an arbitrary 100 minutes, when 80 would have clearly sufficed. Heck, even that’s being generous. There’s not enough material here to justify a 15 minute short, never mind a full-length feature!

And then as the credits begin to roll, it finally hits you. The eureka moment! At long last, you understand. Understand why this has all been so stilted and arduous. How could you have not seen it before? Gehenna: Where Death Lives is not a film in the conventional sense! It is not designed to entertain, tell a compelling story or transport its audience into another word. It has much loftier ambitions than that.

This isn’t a movie, it’s a statement! And that quote on the poster – it isn’t a promotional tagline. It’s a lesson. A cruel, painful lesson, one that you have gradually come to appreciate. You see it now too, don’t you? There are some fates worse than death.